“To boldly go” – Free speech today in the US supreme court 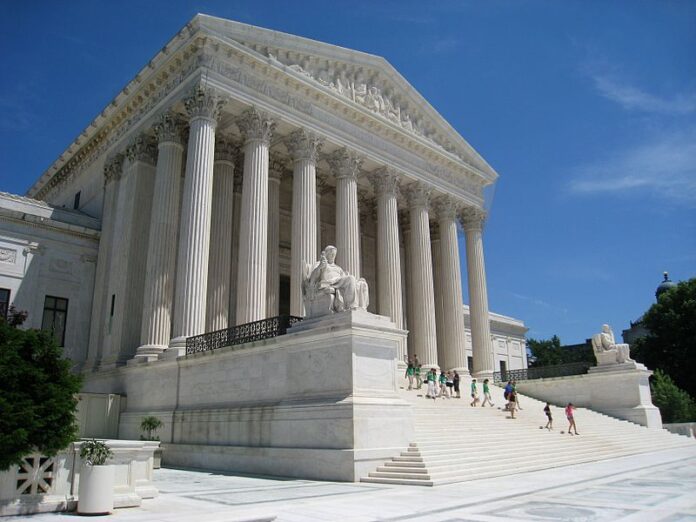 The United States Supreme Court (SCOTUS) has been flexing its muscles in relation to various forms of official censorship. In two important rulings handed down on 19 June 2017, the so-called “Slants” case and the case of Packingham v North Carolina, the Court has come down uncompromisingly in favour of free speech, albeit in two very different legal contexts.

The “Slants” case, otherwise known as Matal v Tam, was a trademark case, brought by a musician named Simon Tam, who in 2006 had set up  an Asian-American dance rock band called The Slants. He sought to register the band’s name, THE SLANTS, as a trademark with the US Patent and Trademark Office in 2011. But section 2(a) of the Lanham Act prohibits the registration of marks that may “disparage..or bring ..into contempt, or dispute” and “persons, living or dead, institutions, beliefs or national symbols”. This prohibition has caused some controversy.

In 2014, the Trademark Office invoked section 2(a) to veto the registration of six marks for a Washington football team, popularly known as “The Redskins”, holding that this term disparaged Native Americans. Meanwhile, it also vetoed THE SLANTS’ application as disparaging a substantial body of persons of Asian descent. Tam’s case became the lead appeal.

Tam argued that his band’s name was not intended to disparage, but rather to reclaim and take ownership of the impugned phrase. He appealed, at first unsuccessfully.

The American Civil Liberties Union (ACLU) has welcomed Tam’s ultimate victory, arguing that government was interfering in the right of minorities to compete in the marketplace of ideas. It has called the prohibition “misguided”, and accused government of acting as “speech police.”

Tam’s luck began to improve on a second appeal to the Federal Court, which decided by 9:3 that section 2(a) was indeed an unconstitutional fetter on the First Amendment, which guarantees the right to free speech.

The government sought to reply on an exception to the First Amendment principle (which prevents state bodies from abridging the speech rights of individuals), arguing that this does not regulate government speech or require government to take neutral positions. SCOTUS disagreed, finding that trademarks are associated with private enterprises, rather than the articulation of state communications.  If trademarks could be categorised as government speech, then this would lead to a situation where government could simply veto viewpoints of which it disapproved. Justice Kennedy concluded that viewpoint discrimination is “a form of speech suppression so potent that it must be subject to rigorous constitutional scrutiny”.

Justice Alito also rejected a subsidiary argument, which sought to classify the proposed trademark registration as “commercial speech”: this merits a more relaxed scrutiny standard. He found that section 2(a) was not narrowly drawn so as to eliminate invidious forms of discrimination; instead, he characterised it as a “happy-talk clause” which was over-broad. Intellectual property lawyers in America consider that this ruling will make it difficult to oppose future applications which contain language or subject matter that could be deemed “offensive” to a particular group.

In Packingham v North Carolina, SCOTUS was concerned with the brave new world of social media. Lester Packingham was a registered sex offender, who in 2002 as a 21 year-old college student had pleaded guilty to “taking indecent liberties” with a 13 year-old minor. In 2008, North Carolina enacted a statute which makes it a felony for a registered sex offender to access a commercial social networking Web site where the sex offender knows that the site permits minor children to become members or to create or to maintain personal Web Pages.”

Packingham inadvertently fell foul of this prohibition in 2010,  after he celebrated a minor personal victory in his local traffic court on his Facebook page:

“Man God is good! How about I got so much favour they dismissed the ticket before court even started? No fine, no court cost, no nothing spent….Praise be to GOD, WOW! Thanks JESUS!”

Unfortunately, his effusive thanksgiving landed him in trouble with the secular authorities. A police officer noticed the post, and Packingham was indicted for breach of the new law. He was convicted and given a suspended prison sentence. He appealed successfully. The Court of Appeals in North Caroline held that the statute was over-broad. Instead of being narrowly tailored to serve the State’s legitimate interest  in protecting minors from sexual abuse, it “arbitrarily burdens all registered sex offenders by preventing a wide range of communication and expressive activity unrelated to achieving its purported goal.”

His victory proved shortlived, as this ruling was overturned by the North Carolina Supreme Court. However two justices dissented, again reiterating that the statute was over broad. Packingham appealed to SCOTUS.

The majority opinion struck down the statute as unconstitutional. Justice Kennedy stated that the First Amendment ensured that “all persons have access to places where they can speak and listen, and then, after reflection, speak and listen once more.” Places such as a street or a park are quintessential forums for the exercises of First Amendment rights. As Justice Kennedy put it, they are “essential venues for public gatherings to celebrate some views, to protest others, or simply to learn and to inquire”.

Social media sites – “the vast democratic forums of the Internet” – are now the most important places for the exchange of views, according to the Court, citing Reno v ACLU, 521 US 844, 868 (1997). There people engage in a wide array of protected First Amendment activity on topics “as diverse as human thought.”

Jutsice Kennedy noted that this case was one of the first in which the Court had been asked to consider the relationship between the First Amendment and the Internet, and said that it must exercise “extreme caution” before suggesting that the First Amendment provides scant protection for access to that medium.

He held that the North Carolina law could not stand. It was so broad that it might well bar access to websites as innocuous as Amazon and the Washington Post. It was not sufficiently specific or narrowly tailored to be justified as serving a legitimate State interest: contrast a law which, say, prohibits a registered sex offender from contacting a minor. Nowadays, he noted, people use social media sites to find out about current events, checking employments ads, “speaking and listening in the modern public square, and otherwise exploring the vast realms of human thought and knowledge.”

He found it “unsettling” that only a limited set of websites could be used by those who had served their prison sentences. Even former convicts could derive legitimate benefits from access to the Internet, in particular if they seek to reform and lead lawful and rewarding lives. He concluded by repeating the conclusion of Ashcroft v Free Speech Coalition 535 US at 255:  as a general rule, the Government “may not suppress lawful speech as the means to suppress unlawful speech”.

The minority opinion, led by Justice Alito, concurred with the result, finding the law’s “staggering reach” violated the First Amendment. It covered sites which were most unlikely to aid recidivist sex offenders, such as the health site WebMD.  They differed somewhat as to the majority’s dicta. Justice Alito complained of the majority’s “undisciplined musings” and “unnecessary rhetoric” about the analogy between the Internet and public squares and parks.

He suggested that “there are important differences between cyberspace and the physical world”, and that caution should be used in applying First Amendment guarantees to the Internet. He noted that parents find it easier to monitor their children’s physical locations, and the fact that the Internet “offers an unprecedented degree of anonymity”. He urged a circumspect approach, “taking one step at a time.”

Both these cases are of interest. IP lawyers will find the Tam case instructive. Criminal practitioners and child protection campaigners should take heed of the Packingham decision. Tam illustrates the difficulty in trying to impose policy objectives on business brands by means of an overly paternalist approach to trade mark registration. Packingham illustrates the problem of legislative overreach, and the tension between seeking to keep tabs on sex offenders who might re-offend, whilst not shutting them out from rehabilitation within wider society. Justice Alito’s more diffident approach to Internet regulation may be a portent of forensic struggles to come.

By contrast with the First Amendment to the United States’ Constitution, the broad policy exceptions set out in Article 10.2 of the European Convention on Human Rights offer more potential routes to curtailing speech rights on public policy grounds. Even so, the requirements of necessity and proportionality should make it difficult for public authorities to interfere with such a fundamental right as freedom of expression, unless the interference is closely tailored to a legitimate state aim, and is sufficiently narrowly defined. Meanwhile, free speech advocates, policy-makers and courts will continue to wrestle with the question of Internet regulation: to what extent should Cyberspace be made a “safe place”?